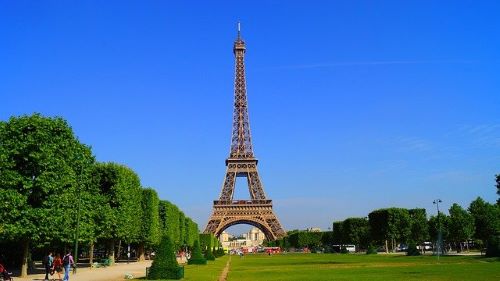 Hotels near the Eiffel Tower

The Eiffel Tower was constructed in 1889 and is 324 metres tall. In 2015 it attracted allmost 7 million paid visitors. The 4-star Hotel Pullman Paris Tour Eiffel is in a great location with amazing views of the Eiffel Tower. The property has more than 3390 excellent reviews (8.6). Campanile Paris 15 Tour Eiffel is a popular 2-star property (1960 reviews, 7.1). Three star Hotel de la Paix is 650 metres from the Eiffel Tower and combines discount prices with very good reviews.

Hotels in the Montmartre

Montmartre is a hill and historic district in Paris. In the past many great artists as Picasso, Vincent van Gogh, Salvador Dali and Claude Monet worked in or around Montmartre. Top attractions are the Basilica of the Sacré-Cœur and Place du Tertre. Nearby is the famous Moulin Rouge theatre. The 2-star Hotel Audran is in the heart of Montmartre. The property is close to Place du Tertre, Sacré-Cœur and the metro. More than 1480 reviews (8.2). Three star Hotel Saint-Louis Pigalle has wonderful reviews (9.1). From Best Western Hotel Montmartre Sacré-Coeur it’s 10 minutes walking to the Basilica. More than 1500 reviews for this property (7.3).

Hotels near the Louvre

The Louvre is the largest museum in the world. More than 9 million visitors visited the museum in 2014. Greatest treasure of the museum is world’s most famous painting Mona Lisa by Leonardo da Vinci. Saint James Albany Paris Hotel Spa (2140 reviews, 8.0) is located across from the Jardin des Tuileries. Distance to the Louvre museum is 650 metres. The Bons Enfants Hotel is a 3-star property with a great location. To the Louvre is 300 metres and to the metro 200 metres. More than 1340 reviews (8.0).

The Seine River divides Paris in 2 parts: the Left Bank and the Right Bank. On the Left Bank you will find the Latin Quarter and the Eiffel Tower. On the Right Bank is the Louvre Museum, Les Halles, Arc de Triomphe & Champs Elysees and the Montmartre.

The best way to explore Paris is by underground. There are 300 metro stations and 16 different lines. Very often your hotel is within 10 minutes walk of a metro station. Free maps are provided at the metro stations. A single ticket costs €1.90.

Budget hotels can be found in the Montmartre district with its pittoresque streets and in around the Sacre Coeur. Mamy luxury hotels are near the Louvre Museum and Champs-Elysee.