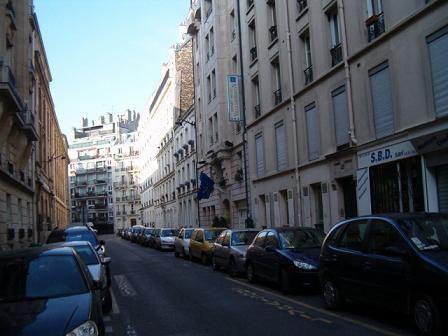 We chose the Residence Villa Daubenton because of space, bedroom + living room and the location in the Latin Quarter. The apartment hotel had good consumer reviews on the Internet.

Personally, I was less satiesfied. Since the apartment was so spacious, the bathroom was disappointing. The bathroom was tiny and the bathroom was only suitable for sitting; I could not stretch my legs. The shower I had to keep in my hands. It could not be attached to the wall. I understand from other reviews on the internet that other guests had larger bathrooms. So I think we were unlucky with the bathroom.

The bed in the living room is a sofa bed. Our daughter was only 12 years old and the only person using the bed. But I think if my wife and I had to sleep on the couch, we would not have had a good sleep.

The location of Villa Daubenton was more far away from the main attractions than expected. Metro stop Censier Daubenton (ligne 7) is about 400 meters away. It takes six metro stops to Notre Dame cathedral. I expected that we would be closer to that church. It has 12 stops to the Eiffel Tower. To the Sacre Coeur and Montmartre takes at least 15 stops with changing lines.

The full price we paid (in 2006) for this apartment was €155 per night excluding breakfast. Breakfast was extra and was €10 per person. It was a waste of money. The breakfast room is not a separate room but only a small space in front of the reception. The bread rolls were as hard as stone (it was Sunday) and allmost there was no choice of food. The tea was microwaved. There was only a coffee pot which was half full as the night porter also drunk of it. The night porter had set the temperature control very high. One of the heaters was right under our table. Breakfast in one of the restaurants on the street is a much better choice than in the hotel. Nearby is a local market with fresh fruits and vegetables.

Our conclusion from this stay in Residence Villa Daubenton: given the price / value it is certainly not enough to return to this apartment in the future.