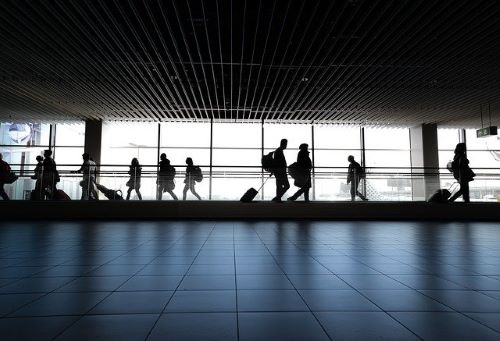 Charles de Gaulle Airport (also known as Roissy Airport) is the main airport in Paris with the most international flights. It has 3 terminals: Paris-CDG 1, Paris-CDG 2 and Paris-CDG 3. Distance to the city is 23km. Orly Airport is a busy airport with domestic flights but also some international flights. It has 2 terminals: Orly-Sud and Orly-Ouest. Distance to Paris city is 15km. Le Bourget is an airport for small business jets and air shows, near Charles de Gaulle Airport Airport. Beauvais-Tille Airport is located 85km from Paris. Several low-cost airlines fly to here (Ryanair, Wizz Air).

The RER train, line B is an easy way of transportation to Paris. Every 10-15 minutes a train is running to the airports. A single ticket from Airport CDG cost €10. The journey time to train station Paris Nord is 25 minutes and to metro station Paris-Châtelet les Halles in Paris center is 28 minutes. The frequency of the RER train is 10-15 minutes on weekdays. At Charles de Gaulle Airport the RER stops in terminal 1 and terminal 3. Free automatic shuttles and a walkway connect the stations at the airport with the terminals. If your are staying a few days and using the metro then a pass is often the best buy. To the airport is 5 zones. A 3-day public transportation pass with unlimited travel for 5 zones cost €55.

Orly Airport is located in the South of Paris and Charles de Gaulle Airport is in the North. The RER train line B is connecting both airports. Passengers to Orly Airport have to get out in RER station Antony. Between Antony and Orly operates the ORLYVAL shuttle train. This is an automatic light rail. The journey with the ORLYVAL takes a few minutes. The (expensive) fare is €13.25.

The Roissybus has a service between 5.15 to 00.30. It rides every 15/20 minutes. A journey is about 60 minutes. Fare is €12. Air France bus has several bus lines to Paris airports running every 15 minutes between 5.45 and 23.00. Fare one way is €12. The Orlybus operates between RER station Denfert-Rochereau and Orly South and Orly West. Fare is €8.50. Budget airlines like Easyjet, Air Berlin, Norwegian Air and SkyEurope fly from Orly West en Orly South.

nightbus
At night, between 01.00 and 04.00 has the public rail transport service shut down. The nightbus then can be a good alternative for an (expensive) taxi.